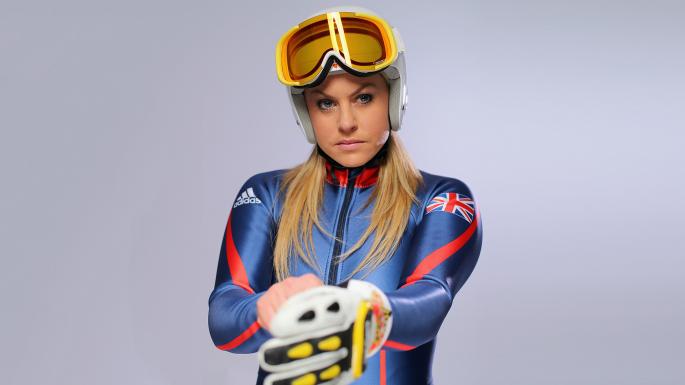 Alcott, 36, won The Sunday Times Junior Sportswoman of the Year aged 13 and will be a judge at this year’s awards. She skied in four Winter Olympics and was the first Briton to win a run in a World Cup race. Alcott retired in 2014 and is now an ambassador for girls in sport, as well as being a TV commentator and organising ski-training camps. She lives in southwest London with her husband, Dougie Crawford, a former downhill racer, and their 19-month-old son, Locki.

At 6.30am Locki wakes me up by saying: “Come, come.” Most days I’ll put on jeans and a T-shirt, but when I was racing I was very superstitious. I had to wear seamless turquoise underwear and a necklace with so many charms it gave me neck pain.

For two-thirds of the year we live in the mountains and mentor young ski racers, but the rest of the time we’re in London. Our house overlooks the Thames, so I come downstairs and slide open the kitchen doors to let the fresh air in. Locki has inherited my hyperness, so by 7.30am we’re doing races around the garden.

Breakfast is eggs and soldiers, a green smoothie and a strong coffee. Before Dougie and I retired, it was very different. He would get up every three hours in the night to eat quinoa, pineapple and tuna, and I would have a black coffee and go on an endurance run. I miss the selfishness of training. All you have to do is make yourself better. Then I had Locki and was expressing breast milk in my commentating breaks at the World Ski Championships.

We’ll spend the morning playing in the park, then run home at 11am so Locki can have his sleep and Dougie and I can bash out some emails. I used to write such eloquent emails. Now I’m a parent they’re just one-liners.

Dougie and I started training young racers four years ago. There’s a lot of pressure in the sport simply because you’re judged on a very finite performance, so the aim of our business is to help the kids go home happy and confident, rather than being a conveyor belt for fast skiers.

Lunch is a quick affair — baguette, halloumi, scotch eggs. In the afternoon we visit a petting farm, or Locki will go to the creche while Dougie and I work out at the gym. I am also a part of X-Elle, an initiative to help young girls build confidence through sport. If you’re good at something as a boy you get celebrated, but to be overly competitive as a girl is seen as arrogant or unattractive.

My mum passed away when I was 23, and when Dougie and I got married, her two best friends bought us each a “meditation chair”. We promised ourselves we would sit in them for five minutes every day and just be still. That I know the number of times we’ve used them says it all. But they make me think about my mum.

In the evenings Dougie and I might paddleboard on the river. At about 6.30 he will cook us dinner. We take it in turns doing bedtime for Locki. Dougie reads to him so calmly in his lovely Scottish accent, but I do all the sounds and actions and get very overexcited. No wonder Locki doesn’t go to sleep afterwards.

If I’m angry or upset about something at the end of the day, I’ll write it down. My diary entries start off full of frustration and passion but there’s always a solution. If I’m not writing, I’ll read — at the moment it’s I Am Pilgrim — or watch TV. I started watching Love Island to see what the fuss was about and got sucked in. It’s taken about 35 years, but I now do a proper cleansing routine on my skin. Then I’ll open our bedroom doors to the balcony and collapse into bed at about 10. I have no middle switch, so I’ll just fall asleep straight away.